Thousands of lanterns on the lake

While in Boston visiting family (Yana and Talia) last night, we were lucky to stumble upon Toro Nagashi, or the Lantern festival, held annually at the Forest Hill Cemetery of Jamaica Plain.  It immediately sounded like a great photography venue, but it was so much more.

When we arrived at sundown, the crowds were already heading for the exit, and we thought we had missed the main event. Rather, we were arriving at the perfect time since the park was completely packed and we could actually catch a few square feet of prime lakeside real estate. The sky was just fading into a dark blue and the lanterns, drifting around all parts of the lake were a brilliant little boxes of gold.  Truly, this was amazing and a not-to-miss event in Boston.  Um, it’s really a not-to-miss event for anywhere.

A message to our passed ancestors

Here’s the wonderful story of the birth of Bon Odori, which culminates in Toro Nagashi.  (Courtesy of wikipedia)

Bon Odori originates from the story of Maha Maudgalyayana (Mokuren), a disciple of the Buddha, who used his supernatural powers to look upon his deceased mother. He discovered she had fallen into the Realm of Hungry Ghosts and was suffering.[3] Greatly disturbed, he went to the Buddha and asked how he could release his mother from this realm. Buddha instructed him to make offerings to the many Buddhist monks who had just completed their summer retreat, on the fifteenth day of the seventh month. The disciple did this and, thus, saw his mother’s release. He also began to see the true nature of her past unselfishness and the many sacrifices that she had made for him. The disciple, happy because of his mother’s release and grateful for his mother’s kindness, danced with joy. From this dance of joy comes Bon Odori or “Bon Dance”, a time in which ancestors and their sacrifices are remembered and appreciated. See also: Ullambana Sutra.

The festival ends with Toro Nagashi, or the floating of lanterns. Paper lanterns are illuminated and then floated down rivers symbolically signaling the ancestral spirits’ return to the world of the dead. This ceremony usually culminates in a fireworks display. 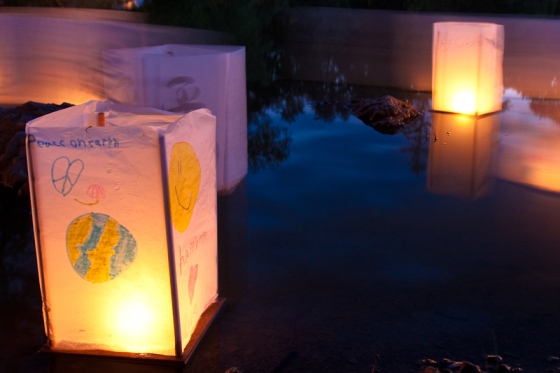 A message for all people

Okay – now some tech stuff – I really enjoyed all the longer exposures here.  I found the lanterns were moving a bit over the course of a 20-30 second exposure, so I decided to add a flash.  I used a 430EXII at 1/8 power – 24mm and hand triggered it in the middle of the exposure.

Touch of birch, side lit by android phone light

This is one where I exposed, flashed, and then moved the camera in circles.  I think its my fave.

One last one with a touch of HDR processing finished in Lightroom.  Movement and all.

Links to Other Creative Works

Here's a list of blogs that I enjoy for instructional purposes, creativity, or just having fun.